888 Online Casino Gets New Jersey Overhaul Ahead Of Poker Makeover

Online gambling operator 888 is turbo-charging its position in New Jersey with the launch of a new gaming platform called Orbit.

Orbit has been live in the UK market since May 2018, followed by launch in a number of other European countries. Now 888 is targeting a bigger share of the NJ online gambling industry with an “enhanced user experience.”

According to CEO Itai Pazner:

“The Orbit platform is without doubt one of 888’s most significant product innovations in recent years and supports our continued focus on delivering the safest, most exciting and most enjoyable online gaming experience possible for our players across regulated markets globally.”

In a presentation to investors on June 4 earlier this year, 888 touted Orbit as having a major impact on its business. Conversion rates for first-time depositors have increased 76% since Orbit’s soft launch in the UK.

New Jersey’s online casino market is currently in the midst of an explosion. The state’s Division of Gaming Enforcement (DGE) reported June online casino revenue of just under $36.3 million, up more than 70% year-over-year.

In New Jersey, the platform will add 35 new games that 888 developed in-house. That brings the 888 Casino catalog up to:

888 doesn’t say what sort of revenue expectations it has. Its New Jersey business, including its partner Caesars Casino, generated $4.1 million in online casino revenue last month. That number was about $2.5 million a year ago, showing growth of 64%. It’s impressive, but it’s lagging slightly behind the market as a whole.

Orbit has a chance to prove it can help 888 outgrow the competition over the next 12 months.

888 Poker next up for a makeover

In April this year, 888 began rolling out its new Poker8 platform.

The lobby of a redesigned poker site typically provides players with the first signs of change. In this case, though, 888 decided not to mess with something that their players already like. Unusually for a new platform, the lobby remained the same.

That isn’t to say that the lobby won’t change; the company plans additional upgrades later in the rollout. For now, it’s at the tables where the changes are most noticeable. 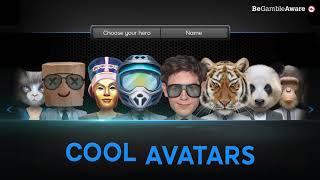 The top-right of the table includes the addition of a new hand replayer. Action on the last hand can now be seen without opening the replayer, but by simply hovering the mouse over the icon. This is similar to the way the function works on PokerStars software.

Customization is a big theme in Poker8.

There are dozens of new table themes, and users can select different themes for different formats. There is also a host of new avatars to choose from. In terms of game play, animations are much slicker and community cards are spread with a perspective tilt. When two or more players are all-in, the software displays the equity for each hand.

One standard feature 888 removed, however, is the ability to customize individual seat positions.

Poker8 has had its problems

Players have been vociferous in complaining about the first phase of Poker8. Some encountered graphics problems, while others lost their player notes and tags during the migration. 888 responded with a commitment to fix the problems, many of which have since disappeared.

“Over the coming months, all players will benefit from additional upgrades and improvements to our next generation poker platform and we’ll be taking on board customer feedback about the new features.”

“Once the roll-out is complete, we believe our best-in-class platform will offer the most entertaining and engaging experience on the market.”

888 committed to bringing Poker8 to the US

At the June 4 investor briefing, 888 told investors that it would soon bring the Poker8 platform to New Jersey. The company hasn’t set a launch date, but it will presumably happen after any technological issues with Orbit are resolved.

The 888 IT team only has so many hours in the day, and candidly, casino games have a much bigger impact on the bottom line than online poker. The group additionally expects to launch its online casino and online poker client in Pennsylvania over the next few months.

It seems pointless to deploy the old software before initiating an upgrade that might irritate customers mere weeks later. It makes more sense to go with the new platform from the outset, even if this means a short delay.

The 888 Poker platform is the only one operating in all three regulated markets — Nevada, Delaware and New Jersey. By rights, it should be the market leader in the US.

Perhaps surprisingly, it only pushed PokerStars out of the lead in Q3 of 2018. And the imminent launch of online poker in Pennsylvania will likely see PokerStars regain its pole position.

The world number 1 is not taking its success for granted. PokerStars is also preparing new software that should make its way to the US market over the next few months. The company launched a pilot of its new mobile software in Denmark in February.

The Stars Group is taking a cautious approach to releasing its new software into the market. Player feedback and several more iterations are in store before the company thinks the product is fit for the US market.

That might give 888 a window of opportunity to impress new US players and secure additional loyalty in markets outside of New Jersey.

Joss Wood - A former founder of Poker Industry Pro and Head of Content at PokerNews publisher iBus Media, Joss Wood is a graduate in English from the University of Birmingham. Joss also holds a master’s degree in Organisational Development from the University of Manchester. His career path has taken him from the British Army, through business and finance to seven years as a successful professional poker player.
Related Items888new jersey
Contact / Advertising Disclosures
← Previous Story Legal Online Gambling And Sports Betting Were Meant For Each Other
Next Story → Kindred Puts Its Weight Behind Online Gambling Trade Group iDEA Growth