Complete Makeover, Slot Machine Edition: The Era Of Skill-Based Gaming Is Upon Us

Steve Ruddock Posted on May 23, 2017 08:00 PDT @SteveRuddock
This article may be outdated. Get the latest news on Industry here.

The era of the pump-and-pull slot machine may soon be at an end. A number of new, innovative products are landing on casino floors, and developers and casinos are showing a willingness to give them a shot.

Casinos are slow to change, so it won’t happen overnight. But 50 years hence, we may look back at this period as the dawn of a new era in slot machines.

The old way of doing things with slots

The game mechanics of the slot machine have undergone very few changes since Charles Fey invented the reel-style slot machine as we know it in the 1890s.

Slots have certainly improved both aesthetically and in functionality over the years. Advancements include the electromechanical machines of the 1960s, the video slot machines of the 1970s, and the dawn of the online slot in the 1990s. Yet, whether it was 1904, 1954 or 2004, it was still a slot machine.

At the end of the day, players are still trying to accomplish the same thing as the slot players of the 1900s: Get lucky and hope the machine aligns different rows and lines of symbols into winning combinations.

That appears to be changing.

Traditional slots are beginning to give way to arcade-style controls and games with far more decision-making on the part of the player.

Skill-based games have been around for a few years. But they always felt a few years off in the future, not quite ready for primetime. That was until G2E 2016, when several manufacturers displayed some impressive wares on the showroom floor.

Soon thereafter, skill-based games made their casino debut. GameCo machines began to appear on the slot floors of Atlantic City casinos, first at Harrah’s, Bally’s and Caesars, and later at Tropicana.

GameCo started with what is perhaps its most hardcore game, Danger Arena. It’s a first-person shooter game that uses a video game-esque remote control.

Since the launch of Danger Arena (which has since been revamped and relaunched as Danger Arena Reloaded), GameCo has added several other titles with broader appeal.

But bringing skill-based gaming to casinos hasn’t been without some setbacks for GameCo.

According to local press, Harrah’s, Bally’s and Caesars have removed Danger Arena and Pharaoh’s Secret Temple from the floor. All three GameCo games are still available at Tropicana and are migrating north to Foxwoods Resort Casino in Connecticut.

While GameCo makes progress on the East Coast, Gamblit Gaming is building its own skill-based gaming empire in Nevada.

Interestingly, Caesars’ casinos are once again the conduit.

After debuting at Planet Hollywood, Gamblit’s interactive gaming tables are now available on the floor of Harvey’s Lake Tahoe. Currently the tables, which support two to four players, feature only two Gamblit titles: 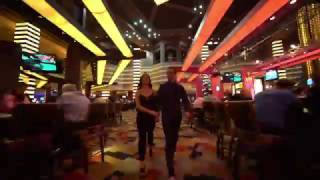 Unlike GameCo’s machines that are housed in traditional cabinets, Gamblit’s interactive tables are more futuristic and likely more intimidating to some casino-goers. This represents two dramatically different models within the small skill-based gaming world.

Does a company try to attract the customer of the future — millennials and gamers? Or, does it create a gaming experience with wider appeal?

On the one hand, there’s GameCo, which houses a modern game inside a familiar package. Graboyes recently told esportsinsider.com:

“A key strategy for GameCo was building on existing slot machine technologies and this has proven to be a key factor in our speed and agility. By implementing new content on accepted hardware and software, we’ve provided a “plug-and-play” replacement for slot machines that appeal to a new audience of Gamers.”

On the other hand, there’s Gamblit and its more modern, but less familiar product, targeting the next-gen casino customer.

Per a press release from Gamblit:

“Each gaming terminal offers a unique, multi-player – multi-game machine with access to a shared 42’’ touch screen, plus a USB charging port, purse hook and two cup holders for each player.”

What happens next for skill-based gaming?

According to Graboyes, the appeal of skill-based games depends on the title. Interestingly, however, the average user falls outside the “millennial” demographic.

“Danger Arena players tend to be male, and 60 percent are under 40 years old,” Graboyes said in an interview with esportsinsider.com. On the other hand, Pharaoh’s Secret Temple attracts a more casual gamer, who swings a bit older and more female.

But as Graboyes noted in the esportsinsider.com interview, for GameCo, skill-based games aren’t about bringing in millennials. They’re about bringing in gamers. To accomplish this, Graboyes believes his company must produce different content to appeal to different tastes.

So whether it’s Gamblit’s touch screen, multi-player tables, or GameCo’s arcade-esque games, there doesn’t seem to be a one-size-fits-all in skill-based gaming. The future is wide open.