Steve Ruddock Posted on Jan 6, 2017 05:00 PST @SteveRuddock
This article may be outdated. Get the latest news on US Online Poker here.

The Coalition to Stop Internet Gambling launched its campaign soon after Sheldon Adelson pledged to “spend whatever it takes” to stop online gambling in November 2013.

One of CSIG’s first moves was to create a memorable video, which among its many claims, warns that terrorists could use online gambling websites for nefarious purposes.

Recently, these brazen protestations were further debunked, when a report by a Congressional task force on terror financing made no mention that online gambling could be used by terrorist organizations to launder money and fund plots.

Nor did the task force recommend the passage of a federal online gambling ban or any other gaming laws to combat terror financing.

The report, entitled Stopping Terror Finance: Securing The US Financial Sector, was a result of an exhaustive, two-year investigation.

Fear-mongering at its finest 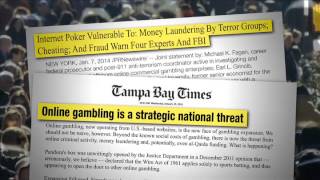 The threat of terrorist organizations funneling money through online gambling websites is a commonly used missive by CSIG. (It is debunked here.)

The terrorism talking point not only made it into the video above, but also made an appearance in this USA Today op-ed penned by former New York Governor and CSIG Co-Chair George Pataki, who wrote:

“Online gambling might be coming to a computer near you, and while it may seem like the only risk is on the player, the FBI fears it will be used by terrorists and organized crime rings to launder money.

In a September 2013 letter to Congress, the FBI warned that while many industries are vulnerable to money laundering, Internet gambling goes a step further by providing an anonymous forum for bad actors to move money undetected…”

The genesis of this falsehood

Of course, the FBI said no such thing, and was only speaking hypothetically in response to a specific question about potential threats.

The link to terrorism is a creation from the minds of anti-online gambling crusaders, not the FBI.

The oft-cited FBI letter never mentions terrorists or terrorism, nor has the FBI ever linked online gambling to terrorist activities.

Again, the FBI letter was not a warning; it was a response to a Congressional request about the potential dangers of money laundering via online gambling. The FBI also concluded these threats were largely preventable and detectable.

“Many of these methods could be detected and thwarted by a prudent online casino,” the FBI letter goes on to say.

While the Congressional task force report doesn’t mention online gambling, it did examine possible uses of the internet for terrorist financing.

There were mentions of peer-to-peer sales websites and online auction sites (where looted antiquities are apparently being sold):

“In recent years, the growing use of the Internet, through peer-to-peer sales websites, online auctions, and social media platforms, has complicated law enforcement efforts to thwart the smuggling and sale of cultural artifacts.”

And social media made a couple of appearances. Terrorist organizations are using social media to organize and recruit:

But again, there doesn’t appear to be any link between terrorists and online gambling, considering online gambling is absent from the nearly 200-page report.

This, despite the fact that the task force chairman was former Pennsylvania Representative Michael Fitzpatrick, who is decidedly against online gambling. Fitzpatrick introduced legislation that would prohibit online gambling on his way out the door in December 2016.

If there was a connection, even tangentially, between online gambling and terrorism it stands to reason that Rep. Fitzpatrick would have mentioned it to bolster his arguments for a federal online gambling ban.

“The report is a straightforward look at the potential terrorism financing threats we face as a nation and what types of legislation can combat it. Not surprisingly, internet gaming and RAWA are nowhere to be found in this report. Despite the exaggerated and often reckless claims of our opponents, the fact is, regulated internet gaming is not a conduit for money laundering, terrorism, or any other illegal activity. In fact, attempting to engage in such activities on a regulated iGaming website would be perhaps one of the dumbest moves a criminal could make. Criminals and terrorists are smart enough to avoid iGaming’s transparent and auditable safeguards. I only wish iGaming opponents were smart enough to stop their fear mongering.”