“This legislation recognizes that millions of New Yorkers play online poker on unregulated and unprotected off-shore poker websites that operate with no oversight, fraud controls, or age restrictions.

We applaud the Senate Finance Committee’s vote to create a safe, legal environment for online poker through legislation that will generate tens of millions of dollars in revenue for taxpayers, and create open and fair opportunities for all providers of online poker.”

As one of the largest live casino operators, MGM’s support is an important counter-balance to objections from casinos opposed to online poker.

Any protestations of cannibalization will be muted, and MGM can authoritatively refute many of the arguments advanced by Las Vegas Sands owner Sheldon Adelson through his Coalition to Stop Internet Gaming (CSIG).

CSIG went so far as to produce an inflammatory video condemning similar legislation in Pennsylvania. The video titled “Are Pennsylvania kids safe online?” presented a misleading impression of internet gambling and was full of outright falsehoods. 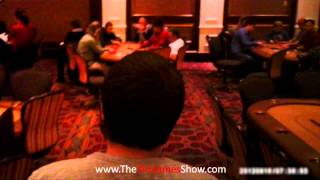 Something similar can be expected for New York as Senator Bonacic’s S5302 bill moves forward.

MGM supported its position with facts

The MGM statement included a clear exposition of the rationale behind the company’s position on the issue of legalizing online poker:

“The alternative isn’t no online poker, it’s an unregulated system of off-shore websites with no fraud controls, responsible gaming requirements or age restrictions. This legislation would create rigorous standards and protocols to protect the public.

The statement also drew on and quoted the support of the New York State Fraternal Order of Police:

“New York should be at the forefront of the effort to prevent our citizens from wagering on unlicensed, unregulated websites located offshore and beyond the reach of law enforcement.”

“Online gambling poses many risks in an unregulated state. But the U.S., along with other leading countries that license and regulate online gambling, understand that burying our head in the sand protects no one. The only way to address online gambling risks to children, seniors, problem gamblers and others is by regulating it and enforcing best practices – not by pretending it doesn’t exist.”

MGM is a long time supporter of regulated internet gaming

The Poker Players Alliance reminded OPR that MGM gave evidence at the hearing on the senate bill last September:

This week, the news broke that MGM has bought out Boyd Gaming’s 50 percent share in the Borgata Hotel & Casino in New Jersey.

The $900 million investment gives MGM 100 percent ownership in the Borgata which even after the market entry of PokerStars remains the top revenue producer in online gaming in New Jersey.

PokerStars Team Pro and the most popular poker player on Twitch, Jason Somerville, tweeted his call to New York Assemblyman Steve Englebright to support the legislation:

While Somerville may not carry the same weight of authority that MGM does with New York politicians, his social media prowess could surprise them with the response.