Steve Ruddock Posted on Mar 7, 2016 11:10 PST @SteveRuddock
This article may be outdated. Get the latest news on US Online Poker here.

The Restoration of America’s Wire Act has hung over the U.S. gaming industry like a cloud of impending doom since it was first introduced some two years ago, and while the bill was never much more than an idle threat, it has been on life support since a disastrous hearing in front of the House Judiciary Committee in December of 2015.

And now things are looking even more bleak for Sheldon Adelson’s pet project.

With the disastrous hearing still fresh on everyone’s mind, and with Pennsylvania and California making headway towards passing online gaming legalization bills, along with a political atmosphere where obstructionism is seen as progress, the plug may soon be pulled on the desultory effort to ban online gambling.

The death of Supreme Court Justice Antonin Scalia will likely grind the United States Senate, and particularly the Judiciary Committee, to a complete halt – as compared to the near-complete halt it’s currently been ground down to.

Reason being, following Scalia’s death, Senate leadership vowed to not only block any nominee, but to take the extraordinary step of not even allowing hearings on a potential replacement.

This stance is polarizing in and of itself, but as Gambling Compliance has reported, it will likely have a trickle down effect, derailing several other potential issues the Judiciary Committee was considering, lest the they appear to be shirking one of their core responsibilities (replacing a Supreme Court justice) while simultaneously pushing forward the agendas of special interests.

One of the issues the Judiciary Committee was rumored to be considering tackling is the Restoration of America’s Wire Act, the federal online gambling ban being pushed by Republican mega-donor Sheldon Adelson. But with everything else going on, a RAWA hearing would almost certainly lead to critics decrying the committee’s priorities, and calls of crony capitalism raining down from the Capitol’s balconies.

Further muddying the waters is the altogether absurd presidential primary we’re being subjected to, which has made the typical mantra of “no controversial legislation during a presidential election year” all the more applicable.

With over 80 percent of Congress up for reelection, including a number of Senate seats in swing states, the candidates are already trying to distance themselves from potentially damaging top of the ticket candidates, so it’s doubtful they’ll want to add any fuel to the fire by voting for (or against) a polarizing bill that would make for an easy attack ad, and isolate some portion of their constituency.

RAWA hearings have been a disaster

Despite having some two dozen cosponsors, Jason Chaffetz is RAWA’s lead (and perhaps only) cheerleader in the House, which isn’t saying very much considering much of what the Utah Representative has said on the matter has been met with extreme skepticism by his colleagues.

Chaffetz’s insistence that the RAWA bill, a federal ban of online gambling, is in fact a state’s rights bill hasn’t gone over very well with the small government Republicans Chaffetz tries to align himself with.

Representative Stacey Plaskett of the U.S. Virgin Islands , and several other members of the House Judiciary Committee went even further, essentially eviscerating the bill and laying bare its true intentions, which you can see in this video: 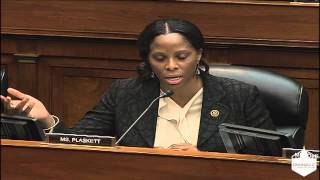 Chaffetz is also fond of shouting down the idea that geolocation technology can effectively ring fence a state with legal online gambling and prevent residents in other states from accessing these sites, something he feels is a ridiculous assertion. In his RAWA statement, the Utah Congressman questioned the capability of ring fencing markets:

“States have a right to regulate gambling within their borders. Two states, Utah and Hawaii, have consistently rejected all forms of gambling. Is it practical to expect these states to be able to maintain this position when residents can access online gaming through their phone?

We need to understand the answers to these questions before we venture down this path.”

And he took these comments even further during the December RAWA hearing, saying, “For anybody to argue that the internet can be walled off and used in just these certain boundaries, it’s a joke, come on.”

“Geolocation is more than just a record of where we are or were. Just because it’s easier in 2016 for law enforcement to track our location and learn intimate details about our lives doesn’t mean those details are somehow less worthy of constitutional protection.”

GeoComply CEO Anna Sainsbury has also thoroughly debunked Chaffetz’s claims that geolocation is unreliable and untested in an op-ed that appeared in Roll Call:

“As a licensed geolocation provider in these three states, I can assure you that, in fact, these regulators literally ran thousands and thousands of tests outside of their own states’ boundaries, attempting to use all the spoofing techniques alluded to by Beckwith (and many more) in order to ensure the location results we provide are the correct ones and that their neighbors’ sovereignty over gaming was respected.

Indeed, the regulators sent letters to their colleagues in neighboring states setting out the measures to ensure proper geo-location and inviting them to audit for themselves the sufficiency of the safeguards.”

Gambling Compliance’s anonymous gaming lobbyist said of the December hearing and the prospects of another one happening anytime soon, “I’ve heard that [House Judiciary Committee chairman Bob] Goodlatte’s key staffer was in the embarrassing hearing and sent back news about what happened,” adding, “I think the [House] Judiciary Committee will stay away from this issue with a 50,000-foot pole.”

Steve Ruddock - Steve covers nearly every angle of online poker in his job as a full-time freelance poker writer. His primary focus for OPR is the developing legal and legislative picture for regulated US online poker and gambling.
Related ItemsRAWASheldon Adelson
Contact / Advertising Disclosures
← Previous Story How Can PokerStars Optimize The Success Of Spin & Go’s In New Jersey?
Next Story → 888poker Moves To Challenge-Based Loyalty Model: Answers And Analysis